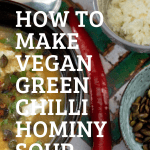 How to make delicious vegan Green Chilli Soup with Hominy. I have written more words extolling the joys of soup than any other dish. I never tire of them: delicate Miso-style broths, bolshy spicy meals-in-a-bowl, more stew than soup, or for ladies who lunch – purees of vegetables, extracting the sheer essence of asparagus, Jerusalem artichokes, or broccoli, to be sipped daintily.

Because I am on a strict (read: no chocolate, biscuits, cake, crisps or butter) but sensible diet, soups often appear on our evening dinner table (or rather, tray on lap, in front of telly): I have ‘cleansed’ my body with Miso Soup, made more substantial with sprinklings of spring onion, glass noodles, little prawn dumplings, beansprouts, tofu and Wakami (dried seaweed, packed with nutrients). I have also added highly nontraditional green beans, chopped in bite size pieces, frozen broad beans and shredded greens and red chillis. Herbs always make an aromatic brew, and coriander and mint are particularly alluring.

Miso Soup can be surprisingly filling and feels incredibly nourishing. For flavour, I recommend the Miso Paste which comes in a jar in your local Health Store, but the instant sachets are OK if you’re pressed for time. Hidden at the bottom of your mug, within the murky depths, are tiny shavings of Bonito (dried tuna) and vivid green flecks of Wakami. I am constantly amazed at how the minuscule pieces of shrivelled seaweed swell and flourish when you pour hot water on them.

For a slightly more substantial but no less nourishing soup, I made my own variation of a Green Chilli recipe, taken from Gourmet Magazine (February 2007).

I am thrilled to discover that there are now several online suppliers of Mexican food in the UK. One company, Lupe Pintos, sell a vast array of the La Preferida range (which I used to bring back with me in my suitcase after a trip to see the US). Unfortunately this stuff doesn’t come cheap, but it’s worth experimenting with if you’re feeling particularly flush. The canned Chipotles in Adobe Sauce give real pep to a chilli that’s just missing something. I’m also a huge fan of the Refried Chipotle Beans and the Mexican Breadcrumbs make an awesome coating for tofu fingers (cut a block of firm tofu into 3” x 1” pieces, dip into seasoned flour, soy milk, then the breadcrumbs, fry for 2-3 minutes until golden brown and deliciously most. Serve in white bread with lettuce and mayo).

But, aside from the hottest potato chips I have ever tasted (Death Rain Habenero Chips – seductively hot), the product I was most interested in, and finally got around to using last night, was the White Hominy.
On first impressions, Hominy looks as though someone dropped their  popcorn into 7-Up, literally soggy popcorn. Not surprising as it is actually dried corn kernels, soaked in an alkaline mixture (originally wood ash) until the husks are removed. The resulting nude kernel is then ready for use. This process goes by the catchy name of Nixtamalization, but despite the retro-trendy moniker, Hominy has been prepared in this manner since 1200BC. Curiously, this basic chemical process renders the kernel far more nutritious (and easier to digest) than nature originally intended.

It has a distinctive smell that reminded me of the Mexican food aisle in American supermarkets, but when used in a spicy soup or stew, it lightens a dish with its not-unpleasantly bland flavour and boiled potato texture.
It was, then, with great pleasure that I could finally bust open this enormous tin of White Hominy for use in the aforementioned Green Chilli Soup.

The original recipe uses ground pork but I felt with the flavours already there, meat could be removed entirely from the recipe without any fuss whatsoever.

What’s so special about this recipe, you’re wondering. How about, a soup so fragrant with chilli and coriander and cumin that you can feel it behind your eyes. Every spoonful makes you smile and feel peaceful whilst simultaneously exciting your taste buds. Don’t panic: I’m not slipping over to the hippy darkside, I just found the soup wondrous.

So, enough wittering, you’re all thinking. We just want the recipe. OK. But, one last piece of advice that I would urge you to take: the garnishes of the toasted pumpkin seeds and sprinkled feta cheese are not optional. The lactic bite of the cheese and the crunch of the seeds are as intrinsic to the dish as the fresh coriander (cilantro), chillis or cumin.

Oh, if you can’t find Hominy, I’m not sure what else to suggest. Canned Sweetcorn would be too sweet and overpowering, chick peas which look similar but are too firm and nutty. Just order a can of Hominy from either of these two online emporiums (if you’re in the UK, that is), Lupe Pintos or MexGrocer.co.uk or amazon, using my affiliate link below (for which I receive a small payment)

How to Make Vegan Pear and Walnut Brownies

How To Make An Easy Vegan Quiche 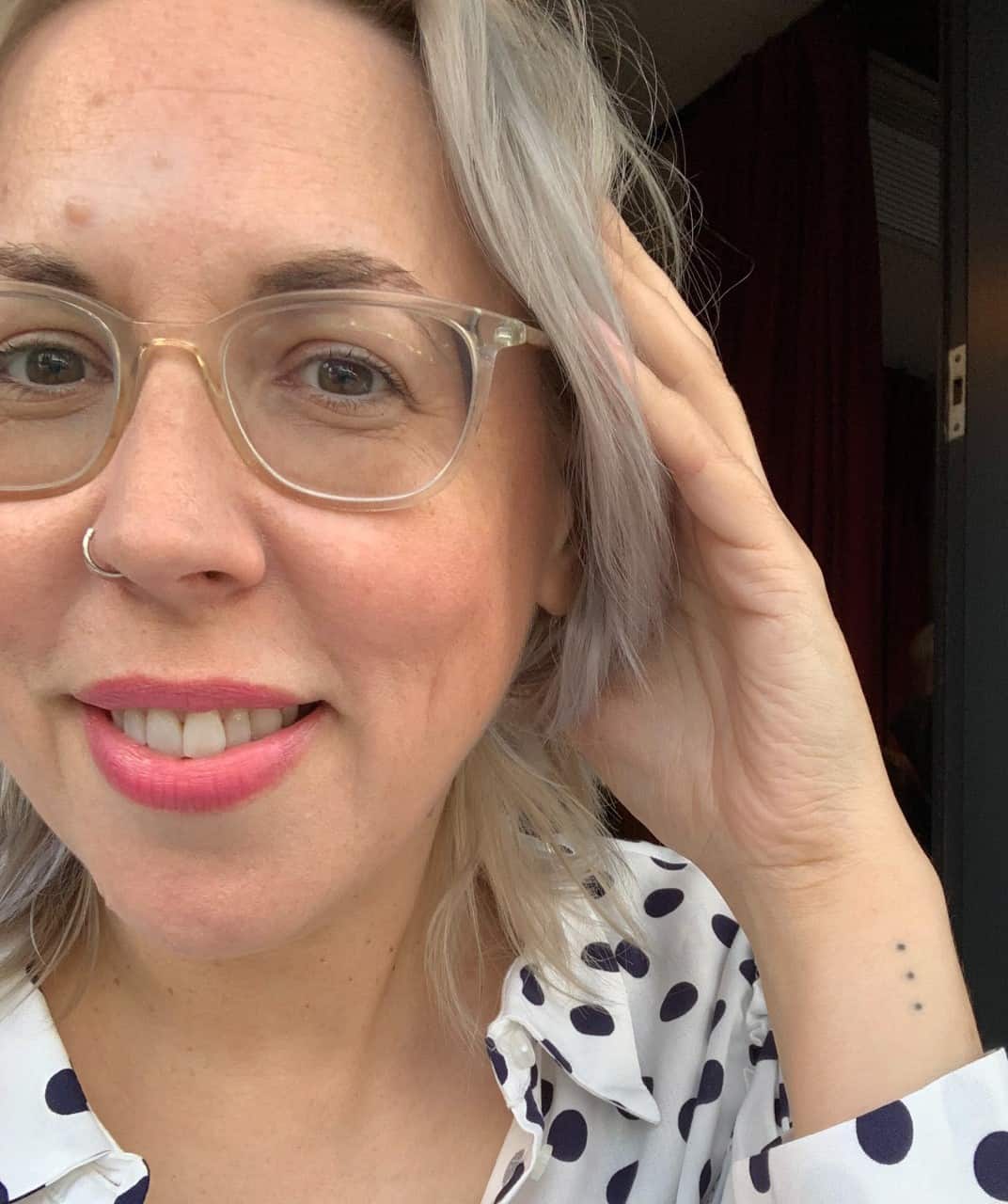